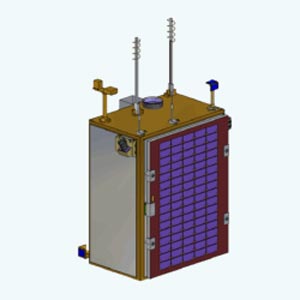 The South African small satellite ZA-002 or Sumbandila is a low-earth-observation (LEO) satellite that can take high-resolution pictures of any area in South Africa and which enables South Africa to collaborate with other countries.

The programme, which will receive government funding of 26m, will be carried out in conjunction with the University of Stellenbosch and Sun Space & Information Systems (Pty Ltd.)

Sumbandila will carry an GSD imager with a ground resolution of 6.25m. Live downlinking of PAL video images during TT&C ground station passes will also be possible. Additional experiments are VLF measurements, an amateur radio payload, an AIS experimental payload and a vibrating string experiment.

Sumbandila was planned to be launched together with Kompass 2N on a submarine-launched Shtil-2.1 rocket, but after unresolved quarrels over a Russian tracking sation on South African territory, russia refused to launch the satellite. A Piggyback launch on a Soyuz-2-1b Fregat has been selected as an alternative.