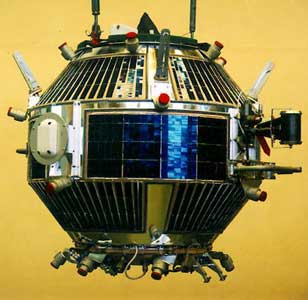 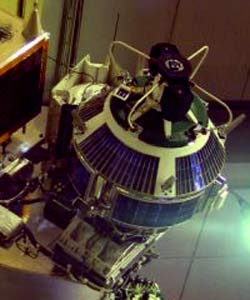 Mozhayets was a series of educational satellites developed at the Mozhaisky military academy. Mozhayets 1 to 4 were based on satellite busses, which were left over from the Strela-1M communications satellite program. The busses werd donated by the manufacturer NPO-PM.

Mozhayets 1 was an engineering model developed and built in 1995, but which was never launched.

The Mozhayets 2 (Zeya, RS 16) satellite was a Russian Military experimental communications satellite launched on 4 March 1997. Zeya was named after the Zeya River, which is very close to its launch site, Cosmodrome Svobodniy. A Start-1.2 rocket transported it into orbit. This was the first satellite launched from this new Russian launch site in far eastern Russia.

Zeya has the following instrumentation onboard:

The retro-reflector array is a box array of 20 corner cubes, which are optimized at 532 nm. Twenty retroreflectors operating with principle "not more than one reflectors works in any direction" were installed on the satellite. Each retroreflector has field of view of 35 arc degrees. Retroreflectors ensured reflection of laser light within 47% of 4 steradian. Satellite's design provided accuracy of link of range measurements to the center of mass with root mean square error of about 5 mm. Systematic correction is 419 mm. The satellite was spinning around Y-axis with angular velocity about 30 revolutions per minute.

RVSN-40 (Raketnye Voyska Strategicheskogo Naznacheniya 40) was a small satellite to test spaceborne GLONASS receivers and new microsat systems and to test the new Rokot launch facility at Plesetsk. It was a navigational and scientific satellite, which was originaly built as a Strela-1M satellite. After having been used for many years as an educational display at the Mozhaisky military academy, students of the academy fitted completely new avionics and payload to the satellite bus. One of its experimental payloads is an Amateur Radio telemetry beacon (RS-20). RS-20 is transmitting CW telemetry on 145.818 and 435.319 MHz. RVSN-40 was named to honour the 40th anniversary of the strategic rocket forces (RVSN). The Rokot-K launch vehicle was destroyed in an accident at Plesetsk on Dec 24, 1999, when a wrong signal sent to the upper stage led to unrepairable damage of the launch vehicle. The satellite was later renamed Sankt Petersburg 300 and was planned for a launch on a Rokot-KM launch vehicle with multiple other payload in 2002, but this was cancelled in favour of a mockup of the Monitor satellite. Finally renamed Mozhaets 3 (RS 20), it was launched on a Kosmos-3M booster with two other small payloads.

Mozhayets 4 (RS 22) was also a training satellite built by the Mozhaisky military academy. It also tested components to be used in upgraded GLONASS satellites. It was orbited with several other small satellites on a Kosmos-3M rocket.