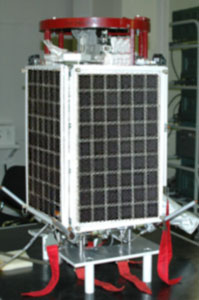 The Universitetsky (Tatyana) satellite, weighing only 30 kilograms and brought to the site in an ordinary railroad compartment, was put into orbit as part of the MGU-250 space/education project to mark the 250th anniversary of Moscow State University (MGU), the oldest in Russia.

The project envisages the creation of a space-based platform for experiments to be conducted by scholars, university professors and students. The satellite will provide communication with MGU branches and ensure tele-education. The university funded the launch. All the satellite's devices were made by MGU scholars and students.

The rector uf MGU said "the satellite's name coincided with one of the traditions in the history of Russia's space launches. Before the spacecraft, with the world's first-ever cosmonaut Yury Gagarin on board, took off on 12 April 1961, one serviceman scrawled his wife's name, Tatyana, on the frosted rocket. The tradition has been observed since then, and this name continues to be written on boosters before important piloted launches."