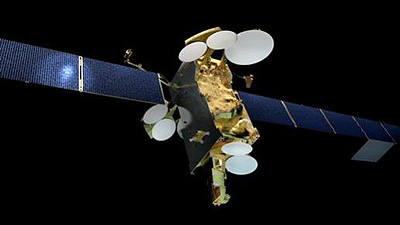 SES 12 is a powerful geostationary communications satellite operating in Ku- and Ka-bands, which uses electric propulsion for initial orbit raising and all on-orbit manoeuvres.

Airbus Defence and Space, the worlds second largest space company, has been awarded a contract by SES in July 2014 to design and build a highly innovative high-performance telecommunications satellite.

The satellite will have a dual mission. It will replace the NSS-6 satellite in orbit, providing television broadcasting and telecom infrastructure services from one end of Asia to the other, with beams adapted to six areas of coverage. It will also have a flexible multi-beam processed payload for providing broadband services covering a large expanse from Africa to Russia, Japan and Australia.

SES-12 will be based on the highly reliable Eurostar E3000 platform from Airbus Defence and Space as an all new EOR (Electric Orbit Raising) version. This version uses only electric propulsion for initial orbit raising, with the reduction in mass enabling the satellite to be equipped with an exceptionally large payload.

SES-12 will operate in the Ku and Ka bands with a total of 76 active transponders, and will be equipped with eight antennas. The satellite also incorporates other state-of-the-art solutions, in particular multi-beam antennas linked to a digital signal processor that enables a multitude of basic spectral channels to be allocated to various beams in a completely flexible manner. It will have a launch weight of 5,300 kg and an electric power of 19 kW.

SES-12 was to launched in late 2017 on an Ariane-5ECA booster, and its electric propulsion system will enable it to reach its geostationary orbit in three to six months, depending on the type of launcher used. In August 2017, the launch providers for SES 12 and SES 14 were switched, putting SES 12 on a Falcon-9 v1.2(ex). Its nominal operational position will be 95° East and it has been designed to remain in service in orbit for more than 15 years.