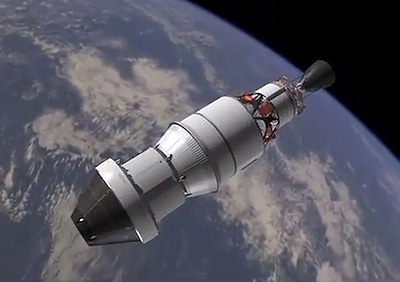 NASA's Orion EFT-1 is a orbital mission to test the reentry of a prototype of the crewed Orion space capsule.

Project Constellation's Orion (formerly CEV - Crewed Exploration Vehicle) is a crewed spacecraft for beyond-earth-orbit missions to the moon, to asteroids and eventually to Mars.

Orion is a capsule design, which inherits its shape from the Apollo capsule, but is otherwise a completely new construction.

In 2011 an uncrewed test flight of a reduced Orion capsule without solar arrays and service module launched by a Delta-4H (upg.) rocket in the latter part of 2013 or early 2014 was approved. The capsule and the dummy service module remain connected with the upper stage until the capsule is separated for reentry.

The launch vehicle launched Orion EFT-1 to an elliptical orbit with an apogee of about 8000 km. In this orbit, the stack orbited the earth twice, then the capsule separated for a skipping reentry and a landing off the coast of Baja California.

Launch was scheduled for September 2014, but has been delayed to 5 December 2014. The mission was successful, culminating with the landing of the capsule in the pacific ocean about 4 hours and 24 minutes after launch.