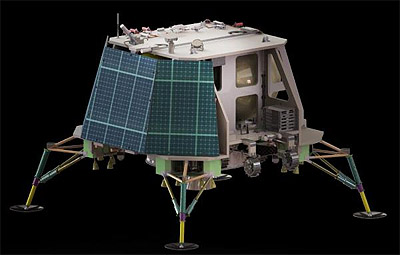 Z-01 was a lunar lander privately developed by OrbitBeyond based on the Team Indus Lunar Lander.

Z-01 was to carry up to 50 kg of commercial payloads. It was based on the Indian entry for the Google Lunar X-Prize, the Team Indus Lunar Lander, but was to be built entirely in the USA.

In May 2019, OrbitBeyond's Z-01 was selected by NASA's Commercial Lunar Payload Services (CLPS) program to deliver four payloads to Mare Imbrium by September 2020 to support the Artemis lunar program. The Z-01 lander was baselined to be launched on a SpaceX Falcon-9 v1.2 (Block 5) rocket.

OrbitBeyond canceled its contract in late July 2019 less than two months after the selection, as internal corporate challenges will prevent it from carrying out a task order that NASA awarded the company 31 May 2019 as part of its Commercial Lunar Payload Services (CLPS) program. The company asked to be released from that contract, and NASA agreed.