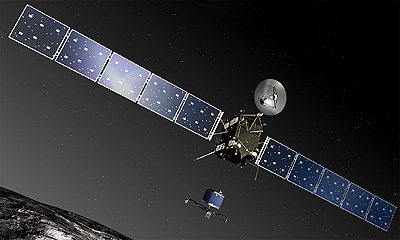 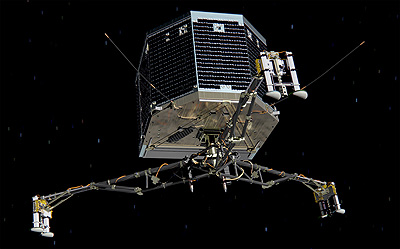 ESA's Rosetta is a mission to study the nucleus of comet 67P/Churyumov-Gerasimenko. It also released a small lander Philae to the surface of the comet.

After delays due to an Ariane-5 launch failure, Rosetta missed the launch window (cancelled 15.01.2003), which is required to reach the original target.

Only minor adjustments were needed to be made to Rosetta. The short time to the new launch window prohibits radical changes to the probe. Like its original mission plan, Rosetta will get to Churyumov-Gerasimenko via a series of complex space manoeuvres. including a Mars flyby to catch the comet out near Jupiter and then follow the target comet in towards the Sun. The time scales involved are similar with the rendezvous planned for August 2014.

The larger size of 67P/Churyumov-Gerasimenko (3 km) 46P/Wirtanen might cause some problems for the lander. There is concern, that the higher gravity will cause the lander to hit the surface at higher speed than the speed it was built for. Possibly the legs will be redesigned to cushion the impact.

The Rosetta probe headed for 67P/Churyumov-Gerasimenko on 2 March, 2004, still launched on an Ariane-5G+ launch vehicle.

The actual comet rendezvous manoeuvre began in May 2014 with arrival at the comet on 6 August 2014. The mapping mission starts in August 2014. The Philae lander will be deployed in November 2014. Rosetta's mission will continue through the comet's perihelion passage on 13 August 2015 until a nominal mission end on 31 December 2015.

The 11 instruments on the Rosetta Orbiter can be grouped according to the types of measurements they will carry out.

The spacecraft entered an orbit around comet 67P/Churyumov-Gerasimenko in August 2014 and operated successfully unti 30 September 2016, when it made a controlled landing on the surface, with the last signal from the spacecraft arriving at 11:19 a.m. UTC. The project decided to land Rosetta to collect some final data close to the comet as it heads away from the sun, depriving the spacecraft of solar power.

The 100 kg Philae lander, which was originally named RoLand (Rosetta Lander), carries nine experiments, with a total mass of about 21 kg. It also carries a drilling system to take samples of sub-surface material. The Lander instruments are designed to study in great detail the composition and structure of the nucleus material.

The instrument on board are:

Philae was released on 12 November 2014 to land on the surface of the comet about seven hours later. It successfully landed on the surface, but the cold gas thruster did not fire nor did the harpoons anchor it on the surface.

Philae completed its prime mission but went into hibernation after 60 hours on the comet's surface as it was not being able to recharge the batteries due to unsufficient lighting conditions. Philae has woken up in June 2015 after seven months in hibernation on the surface of Comet 67P/Churyumov-Gerasimenko.