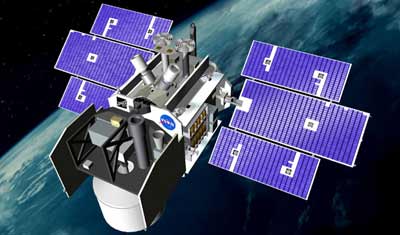 ICESAT (Ice, Cloud & Land Elevation Satellite), formerly EOS-LAM (Earth Observation System - Laser Altimetry Mission), employed the Geoscience Laser Altimeter System (GLAS) to measure changes in the thickness of ice sheets in Antarctica and Greenland, where about 90% of the planet's fresh water is frozen. ICESAT measured the elevations of clouds and land while traveling at 17,000 miles an hour from pole to pole and circling the Earth once every 100 minutes.

ICESAT also gauged the vertical structure of clouds and aerosols in the atmosphere; map the topography of land surfaces; and measure the roughness, reflectivity, vegetation heights, snow cover, and sea-ice surface characteristics.

As part of NASA's Earth Observing System, ICESAT spent five years in orbit detecting changes in the amount of water stored in the polar deep freeze. These changes are major factors in global sea level change and understanding them is key to predicting future changes.

NASA selected Ball Aerospace to provide its Ball Commercial Platform 2000 (BCP-2000) spacecraft bus for the laser altimetry mission. The entire satellite was assembled at Ball facilities in Boulder, Colo., and was controlled on-orbit by the University of Colorado.