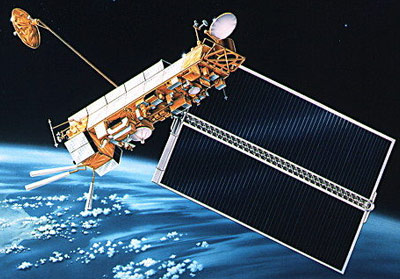 The initial 1989 EOS (Earth Observing System) proposal called for two 15-ton platforms, each carrying 12-15 instruments, which would be launched by a Titan IV rocket. NASA subsequently reduced EOS in cost and scope and distributed its instruments among a larger number of smaller (intermediate-class) satellites.

The EOS program was approved by Congress as an FY 1991 budget initiative. The payload for the first flight (EOS-A1) was selected in January 1991, following Conceptual Design and Cost Reviews (CDCR's) of the selected instruments and IWG Payload Panel recommendations on scientific priorities and synergism. The baseline flight segment consisted of two series of large observatories, EOS-A and-B, in 1:30 PM ascending, sun-synchronous orbit, launched by a Titan-IV with Solid Rocket Motor Upgrades (SRMU's) from the Western Space and Missile Center (WSMC). Each observatory had a 5-year life and each was to be replaced twice to provide a 15-year mission. The budget runout through FY 2000 was $17 billion.

Instruments baselined for the missions were: