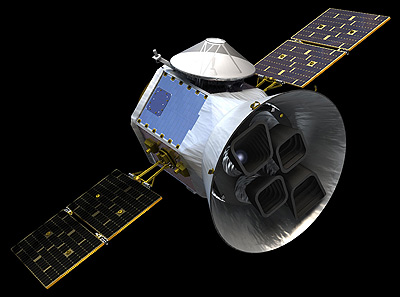 TESS (Transiting Exoplanet Survey Satellite) will use an array of telescopes to perform an all-sky survey to discover transiting exoplanets ranging from Earth-sized to gas giants, in orbit around the nearest and brightest stars in the sky. Its goal is to identify terrestrial planets in the habitable zones of nearby stars. Its principal investigator is George Ricker of the Massachusetts Institute of Technology in Cambridge.

Unlike Kepler, which looks at a single region of the sky, TESS will perform an all-sky survey, focusing on stars within about 200 light-years of the Earth and identifying nearby exoplanets for followup observations.

TESS will launch by 2017 into a 2 to 1 lunar resonance highly elliptical orbit of 17 × 59 RE (Earth radii) by using a perigee kick motor and a lunar flyby, operating for at least two years (starting at the conclusion of a 2 month ascent and commissioning phase) with consumables designed for a 4 year mission life. Equipped with four wide-field cameras, the spacecraft would be able to observe potentially hundreds of thousands of stars, looking for those telltale periodic dips in brightness caused by transiting exoplanets.

Orbital was selected to provide a LEOStar-2 based bus. The TESS instrument consists of four wide field-of-view CCD cameras. The CCDs, manufactured at the MIT Lincoln Lab, are extremely efficient for photon detection and are a derivative of silicon CCDs previously developed for space-based x-ray missions including NASA's Chandra X-ray observatory and several Japanese missions.

TESS was baselined with Athena-2c or Taurus-3210, both with additional Star-37FM kick motor. The baselined launch site was Cape Canaveral. Also Antares and Falcon-9 v1.2 were considered. In December 2014, a Falcon-9 v1.2 was selected to put TESS into orbit.

During ground testing it was found, that the focus of the cameras will drift when the spacecraft cools to operating temperatures after launch. Despite being slightly out of focus, the cameras will still be able to achieve their science goals, so NASA decided to launch TESS unmodified.