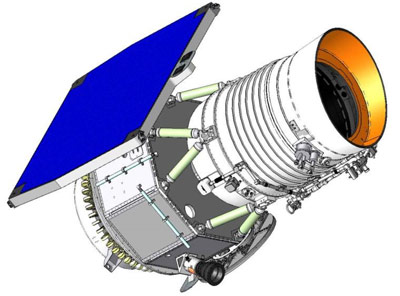 WISE (Wide-field Infrared Survey Explorer), formerly known as NGSS (Next Generation Sky Survey), is a MIDEX class explorer mission to conduct an all-sky survey from 3.5 to 23 microns up to 1000 times more sensitive than the IRAS survey. A 6-month mission with a 1-month checkout, and 135% margin on cryogen lifetime, is planned. 4 color images of a 38'×38' FOV taken every 8.8 seconds, synchronized with the orbital motion to provide total sky coverage with overlap between revolutions.

The single WISE instrument is a four-channel imager which will take overlapping snapshots of the sky. It includes:

WISE was selected for an extended Phase A study leading to a decision in 2004 on whether to proceed with the development of the mission. WISE was selected in August 2004 by NASA as its next Medium-Class Explorer. With this decision the WISE mission proceeded into Phase B (Definition Phase). This phase concluded with a preliminary design review in April 2005.

WISE has been originally baselined for a Taurus-2210 launch, but a Delta-7320-10C launch vehicle was finally selected. It was successfully launched on 14. December 2009.

During the first six months of its mission, WISE surveyed the entire sky in four wavelengths of infrared light, discovering 19 comets and more than 33,500 asteroids, including 120 near-Earth objects. It completed a second survey covering half the sky in the same wavelengths during the last three months.

In September 2010 the observatory ran out of hydrogen coolant, but continued to operate with two of the four detectors, when funding was provided for the extended mission called Near-Earth Object WISE (NEOWISE). These two detectors still will be useful in detecting asteroids in the main belt between Mars and Jupiter and near-Earth objects, the asteroids and comets moving relatively close to Earths orbit. NASA approved in August 2010 a three-year asteroid-hunting mission.