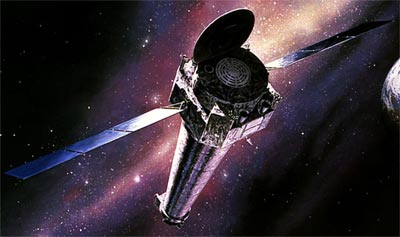 The principal science objectives of the mission were to determine the nature of celestial objects from normal stars to quasars, to understand the nature of physical processes which take place in and between astronomical objects, and to generally study the history and evolution of the universe. Observations will be made of X-rays from high energy regions such as supernova remnants, X-ray pulsars, black holes, neutron stars, and hot galactic clusters.

The spacecraft has a cone-shaped body with an octagonal structure surrounding the wide end. Two solar panel wings extend from opposite sides of the structure. The main opening is at the wide end covered by a sunshade door with a contamination cover. An aspect camera and stray light shade are mounted near the opening and 2 low gain antennas and two fine Sun sensors are affixed to the outside structure. Thermal control is maintained by a radiator, insulators, heaters, and thermostats. Power generated by the solar panels is stored in three banks of batteries. The 10 m focal length X-ray telescope consists of four nested paraboloid-hyperboloid X-ray mirror pairs, arranged in concentric cylinders within the cone.

The four instruments are located near the focus at the narrow end of the cone:

The originally planned XRS X-ray microcalorimeter detector was spun off to a separate mission, AXAF-S, to be launched by a Delta rocket into a polar sunsynchronous orbit. This in turn was later cancelled and the XRS was launched on the Japanese ASTRO-E mission.