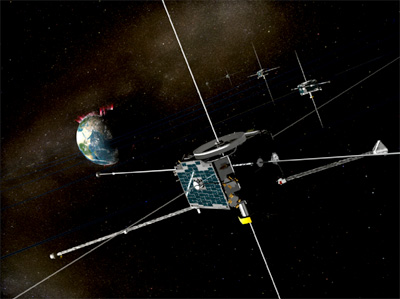 THEMIS (Time History of Events and Macroscale Interactions during Substorms) answers fundamental outstanding questions regarding the magnetospheric substorm instability, a dominant mechanism of transport and explosive release of solar wind energy within Geospace. THEMIS will elucidate which magnetotail process is responsible for substorm onset at the region where substorm auroras map (~10 Re):

The individual THEMIS satellites are spin stabilized. All probes were launched together on the same launch vehicle. THEMIS's probes use flight-proven instruments and subsystems, yet demonstrate spacecraft design strategies ideal for Constellation class missions. THEMIS is complementary to MMS and a science and a technology pathfinder for future STP missions.

The Science Payload consists of:

The satellites are injected into a 1.07 Re × 14.2 Re, 13.4° orbit and maneuvre by their own propulsion systems to following orbits:

The Artemis mission is a second phase to the Themis mission which is currently studying solar sub storms and the Earth's radiation belts with five spacecraft in various elliptical orbits. After the nominal Themis mission is complete, the outer two satellites P1 and P2 will be unable to contribute to the continued mission due to non-optimal orbits and extended shadows. As a result of this inability to contribute, normally the satellites would be de-activitated. However, in this case the two satellites will be sent to the Moon to begin their new mission: Artemis. The Artemis mission plans to study solar wind and shocks, the lunar environment and lunar magnetotail characteristics.

As part of this mission this project will validate the current orbit plans while increasing fidelity of the models. These orbit designs take advantage of 4-body dynamics to raise the satellites to the Moon while minimizing delta-v. The transfer for P1 includes two lunar fly-bys and use of weak stability boundaries, while P2 utilizes only one lunar fly-by. Once the satellites reach the Moon they will insert into lissajous orbits around LL1 and LL2. This will be the first time a satellite has been placed in these orbits, thus providing very important information about orbit maintenance for future missions. Both satellites will then depart these lissajous orbits and transfer to elliptical lunar orbits. Once this transfer orbit design has been validated using NASA's General Mission Analysis Tool (GMAT) statistical error analysis will be done to insure potential orbital correction maneuvers do not exceed the available delta-v budget.