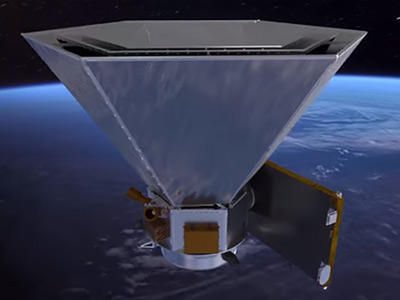 SPHEREx (Spectro-Photometer for the History of the Universe, Epoch of Reionization and Ices Explorer) is an all-sky infrared spectral survey explorer satellite developed under NASA's MIDEX (Medium Explorer) program. SPHEREx is a partnership between California Institute of Technology (Caltech), JPL, Ball Aerospace, and the Korea Astronomy and Space Science Institute.

SPHEREx will create spectra (0.75  4.2 µm at R = 40, and 4.2  5 µm at R = 135) with high sensitivity using a cooled telescope with a wide field-of-view for large mapping speed. During its two-year mission, SPHEREx will produce four complete all-sky maps that will serve as a rich archive for the astronomy community. It will perform an all-sky survey to measure the near-infrared spectra of approximately 450 million galaxies.

SPHEREx implements a simple and robust design that maximizes spectral throughput and efficiency. SPHEREx achieves this with no moving parts except for one-time deployments of a sunshield and aperture cover. Design features have been proven effective on previous missions, and include: