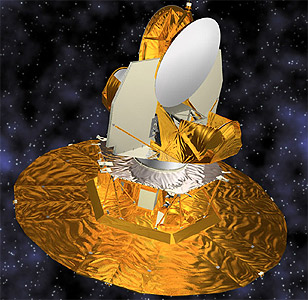 MAP (Microwave Anisotrophy Probe) is a follow up mission to COBE, which detected the anisotophy of the microwave background radiation. It has one instrument, which consists of a set of passively cooled microwave radiometers with 1.4 × 1.6 meter diameter primary gregorian reflectors to provide the desired angular resolution. The instrument has five frequency bands from 22 to 90 GHz to facilitate separation of galactic foreground signals from the cosmic background radiation.

MAP uses differential measuring, i.e.it measures the temperature difference between two points in the sky rather than measuring absolute temperatures. An orbit about the Sun-Earth L2 libration point provides for a very stable thermal environment and near 100 percent observing efficiency since the Sun, Earth, and Moon are always behind the instruments field of view.

It was launched in a highly excentric phasing orbit, at the fourth apogee it made a lunar fly-by and moved to a L-2 Sun-Earth Lagrangian orbit.