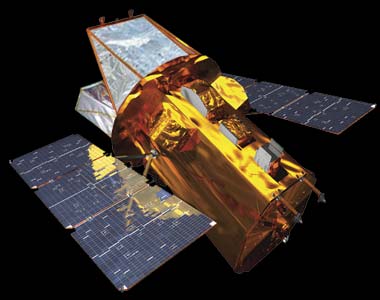 Swift is a first-of-its-kind multiwavelength observatory dedicated to the study of gamma-ray bursts. The main mission objectives are:

During its nominal 2-year mission, Swift is expected to observe more than 200 bursts with a sensitivity ~3 times fainter than the BATSE detector aboard the Compton Gamma-Ray Observatory. Swift's Burst Alert Telescope will detect and acquire high-precision locations for gamma ray bursts and then relay a 1-4 arc-minute position estimate to the ground within 15 seconds. After the initial burst detection, the spacecraft will "swiftly" (approximately 20 to 75 seconds) and autonomously repoint itself to bring the burst location within the field of view of the sensitive narrow-field X-ray and UV/optical telescopes to observe afterglow. Swift will provide redshifts for the bursts and multi-wavelength lightcurves for the duration of the afterglow. Swift measurements will be of great interest to the astronomical community and all data products will be available to the public via the internet as soon as they are processed. The Swift mission will represent the most comprehensive study of GRB afterglow to date.