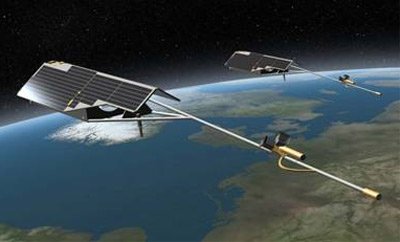 The objective of the Swarm mission is to provide the best ever survey of the geomagnetic field and its temporal evolution, and gain new insights into improving our knowledge of the Earth's interior and climate. It is a follow-up mission to CHAMP.

The Swarm concept consists of a constellation of three satellites in three different polar orbits between 450 and 530 km altitude. High-precision and high-resolution measurements of the strength and direction of the magnetic field will be provided by each satellite. In combination, they will provide the necessary observations that are required to model various sources of the geomagnetic field. GPS receivers, an accelerometer and an electric field instrument will provide supplementary information for studying the interaction of the magnetic field with other physical quantities describing the Earth system – for example, Swarm could provide independent data on ocean circulation.

The multi-satellite Swarm mission will be able to take full advantage of a new generation of magnetometers enabling measurements to be taken over different regions of the Earth simultaneously. Swarm will also provide monitoring of the time-variability aspects of the geomagnetic field, this is a great improvement on the current method of extrapolation based on statistics and ground observations. The geomagnetic field models resulting from the Swarm mission will further our understanding of atmospheric processes related to climate and weather and will also have practical applications in many different areas, such as space weather and radiation hazards.

Two satellites orbiting side by-side, decaying naturally from an initial altitude of 460 km to 300 km over 4 years; the third maintains an altitude of about 530 km. The inclination difference of 0.6° between the lower pair and the higher satellite ensures a 90° difference in orbital plane by the third year of operations.

Following launch vehicles were evaluated for carrying the Swam spacecraft: Dnepr, Kosmos-3M, Rokot-KM and Vega. A Rokot-KM eventually launched the constellation on 22 November 2013.

In February 2018, ESA and the Candian CSA made a deal to add the Canadian CASSIOPE 1 satellite under the designation Swarm Echo with its ePOP payload as the fourth member to the Swarm constellation.