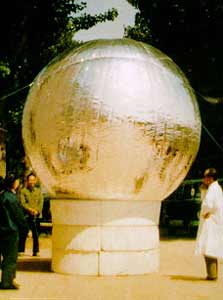 SJ 2B (Shi Jian 2B) was a passive radar calibration satellite.

The SJ-2B payload consisted of a 4 m diameter balloon satellite, which was tethered by a 600 m long silk tether to a 45 cm metal sphere.

SJ 2B was launched as one of three payloads on a FB-1 rocket in September 1981. An earlier launch failure in July 1979 reportedly carried the same payloads.