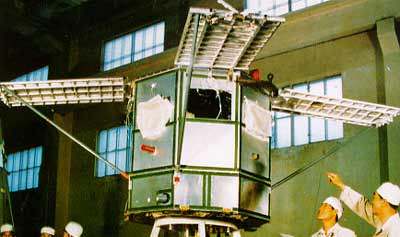 SJ 2 (Shi Jian 2) was a Chinese satellite mission to measure and study the micrometeoroids and debris environment and to conduct electromagnetic background experiments.

the satellite featured a spin-stabilized octahedral prism shaped structure and and was sun-pointing with a total mass of 250 kg. The satellite structure had a length of 1.2 m and an outer diameter of 0.615 m. Four deployable solar wings are attached to the top of the satellite.

SJ 2 was launched as one of three payloads on a FB-1 rocket in September 1981. An earlier launch failure in July 1979 reportedly carried the same payloads.