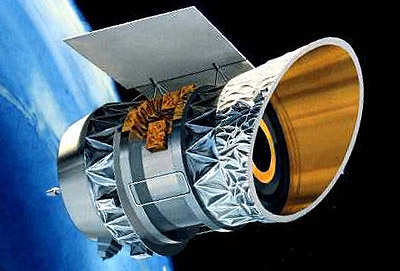 IRAS (Infra Red Astronomical Satellite) was a mission with joint execution by the United States (NASA), the Netherlands, and the United Kingdom. The basic goal of this mission was to obtain a full-sky survey over the approximate wavelength range 8 to 120 micrometers with four broadband photometry channels.

IRAS contained a 0.6 m Ritchey-Chretien telescope cooled by helium to a temperature of near 10 K. An array of 62 detectors was used to detect the infrared flux in bands centered at 12, 25, 60, and 100 micrometers. The noise equivalent flux densities were, respectively, 0.1, 0.1, 0.1, and 0.3 Jy (1 Jansky = 1E-26 W/sq m-Hz) in the four survey bands. The positions of galactic and extragalactic sources were determined to an accuracy of 0.5 arc-min. In addition to the focal-plane detector array used for the all-sky survey, a low-resolution spectrometer and a 60 and 100 micrometer chopped photometric channel were included on IRAS. 73 kilograms of superfluid helium kept the telescope at a temperature of 2 kelvins (about -271 °C), keeping the satellite cool by evaporation.

To scan the sky for the survey, the satellite was rotated at a constant angular velocity perpendicular to the satellite-sun vector. IRAS could be pointed also at a selected celestial object for up to 12 min. This pointing ability permitted observations of selected objects with up to a factor of 10 increase in sensitivity or spatial resolution compared to that of the survey.

The on-board supply of liquid helium was depleted after 10 months on 22 November 1983, causing the telescope temperature to rise, preventing further observations. The spacecraft continues to orbit close to the earth.

The IRAS observations led to the discovery of three asteroids, including 3200 Phaethon (an Apollo asteroid and the parent body of the Geminid meteor shower), six comets, and a huge dust trail associated with comet Tempel-2. The comets included 126P/IRAS, 161P/Hartley-IRAS, and comet IRAS-Araki-Alcock (C/1983 H1), which made a close approach to the Earth in 1983. Out of the six comets IRAS found, four were long period and two were short period comets.