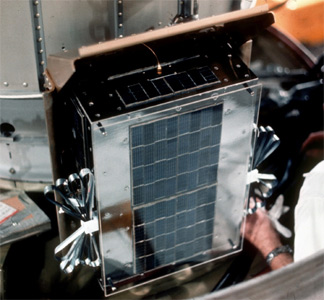 AMSAT P2A (OSCAR 6, Phase 2A) was a small communications satellite designed by AMSAT-NA for use by amateur radio operators.

AMSAT P2A was a rectangular, magnetically stabilized spacecraft which measured 16 × 30 × 44 cm, and included antenna protruding from the centers of the four smaller surfaces. Power supply was by batteries which were rechargeable from solar cells located on all exterior satellite surface. The satellite contained telemetry-tracking beacons and a repeater which could use a storage capability. The satellite featured a command system, which was capable of turning off all equipment except the 29.45 MHz beacon.

With the attitude magnet aligned normal to the 10 m split dipole antenna and parallel to the two other monopole antennae, 10 m nulls occurred synchronously with spacecraft spin except over polar regions where nulls occurred for the 0.7 m and 2 m signals. The 29 MHz beacon used a half-wavelength, 5 m dipole extending through the spacecraft while the other two quarter-wavelength monopole antennae extended 50 cm (146 MHz receiver) and 17.5 cm (29.5 MHz beacon and repeater transmitter) respectively, along the spin axis.