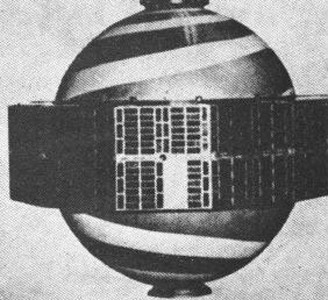 Transit 3B [US Navy]

Transit 3A was a US Navy navigation satellite that was destroyed by Range Safety when the Thor Able-Star launch vehicle shut down too early. It was launched with the piggyback Grab (2) (Solrad 2) satellite.

The Transit 3B satellite was powered by nickel-cadmium batteries charged by 6600 solar cells. It contained instruments for advanced development of an all-weather global navigation system for surface craft, submarines, and aircraft. Transit 3B contained two transmitting systems, a command system, a despin system, and electronic clock, a telemetry system, and a digital memory system for storing orbital data from ground stations to compute an accurate navigational fix. A TR-17 type SECOR (SEquential COllation of Range) transponder was carried as part of a new geodetic survey system.

Transit 3B was launched with LOFTI 1. The two satellites failed to separate from the Able-Star stage and from each other owing to a programmer malfunction during launch. The orbit was more elliptical than the planned circular orbit, which shortened the satellite's lifetime to 37 days. Satellite transmitters functioned normally, and signals were received although the elliptical orbit decreased the value of the data.