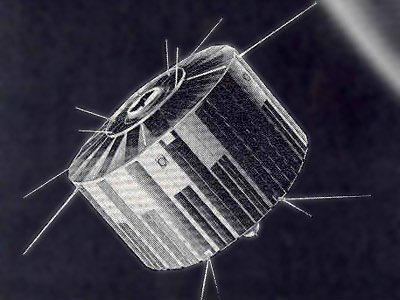 Transit 4B [US Navy]

Transit 4A was a relatively small spacecraft. It was launched with two other spacecraft from the same launch vehicle. Its shape was nearly cylindrical (22-faced right prisms plus a base and top), 109 cm in diameter, and 79 cm in height. Most of the spacecraft surfaces were covered with solar cells for use with nickel-cadmium batteries. The primary mission was to serve as one of four operational navigational satellites for use by ships and aircraft. In addition, Transit 4A carried a nuclear power source SNAP-3 for testing.

Transit 4B was a US Navy navigation satellite launched by a Thor-DM21 Able-Star rocket. It carried a SNAP 3 nuclear power source.

Transit spacecraft were developed for updating the inertial navigation systems on board US Navy Polaris submarines, and later for civilian use. Transit receivers used the known characteristics of the satellites orbit, measured the Doppler shift of the satellite's radio signal, and thereby calculated the receivers position the earth. As a single spacecraft travelled overhead, the user measured the Doppler shift over a 15 minute period by receiving timing marks and satellite orbital information on two separate frequencies, 149.99 and 399.97 MHz. These signals were corrected for ionospheric refraction and the information was then fed into the user's navigation system.