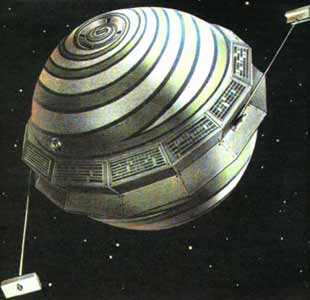 Transit 1B [US Navy]

Transit spacecraft were developed for updating the inertial navigation systems on board US Navy Polaris submarines, and later for civilian use. The receivers used the known characteristics of the satellites orbit, measured the Doppler shift of the satellites radio signal, and thereby calculated the receivers position on the earth.

Transit 1A was launched on a Thor-DM18 Able-2 (mod), but failed to reach orbit. The signals received from the satellite during the suborbital flight were used to verify the concept.

Transit 1B was launched into orbit by Thor-DM21 Able-Star with a navigation payload experiment at Cape Canaveral. It demonstrated the first engine restart in space and the feasiblity of using satellites as navigational aids.

Additionally, it carried an Infrared scanner, which was originally developed for project Pilot (NOTSNIK).