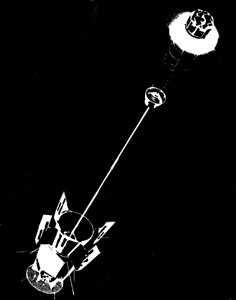 Transit 5BN-1 was launched on 28 September 1963 into an excellent orbit. Unfortunately, the satellite developed a problem that kept it from being fully useful as an operational satellite for navigation: It achieved gravity-gradient stabilization upside down, and thus the signal level was too low for operational users with lowgain antennas. However, geodetic and navigational evaluation data were obtained.

Transit 5BN-2 was launched on 5 December 1963 and became the first operational navigation satellite. It was used regularly by both surface and submarine units of the Navy until November 1964. From the time that Transit 5BN-2 became operational, at least one satellite has been operational for routine use by the Navy.

Transit 5BN-3 was launched on 21 April 1964 but failed to achieve orbit, after which it was decided that the operational satellites would be solar powered because of the lower cost and the need to obtain special approval to launch each nuclear-powered satellite.