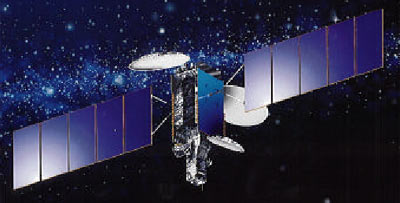 Rainbow 1 is a high power Ku-band direct broadcasting satellite, which was ordered by Cablevision from Lockheed Martin, using the A2100AXS bus. Cablevision remains very secretive about the details of this satellite. It provided direct broadcast services across the continental United States (CONUS) from its final orbital location at 61.5° west longitude. The spacecraft features 24 MHz Ku-band high power transponders with a combination of 135 Watt and 65 Watt power amplifiers. The flexible design of the payload provides full interconnectivity to provide either all CONUS or all spot beam coverage through 22 individually programmable spot beams or a selectable mixture of both spot and CONUS coverage. The design life of the spacecraft is 18 years.

In January 2005 Cablevision agreed to sell the Rainbow 1 satellite to EchoStar. In March 2006, the satellite was renamed EchoStar 12.

The satellite has lost some capability due to degradation of its solar power system.

In late October 2019, the satellite was raised into a graveyard orbit above GEO, where it was deactivated and passivated.