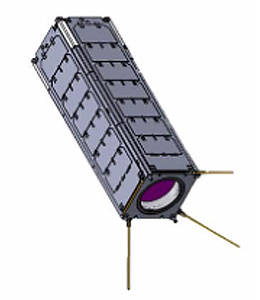 The Phoenix is a 3U CubeSat technology demonstration mission to determine the effectiveness of nanosat platforms to conduct scientific investigations of urban environments, especially urban heat islands.

It will carry a thermal-IR imaging payload to study spatial and temporal changes in the heat properties of Phoenix, Arizona, as well as several other U.S. cities, including Seattle, Minneapolis, New York, and Honolulu.

The satellite is three-axis stabilized to allow pointing of the imaging instrument while flying ofer targets of interest. All other times, it will be oriented so that its solar panels face the sun more effectively. Projected lifetime is about 1 year.

The imager is based on the THESIS instrument which uses commercial micro-bolometer arrays. The system will yield secondary science from thermal imaging of ocean currents, volcanic plumes, and other surface processes. It is a FLIR Tau2 640 micro-bolometer uncooled long-wavelength infrared thermal imager with a 100 mm lens.

It was selected in 2017 by NASA's CubeSat Launch Initiative (CSLI) to be launched as part of the ELaNa program. It was launched on board of Cygnus CRS-12 to the ISS, where it was deployed on 19 February 2020.