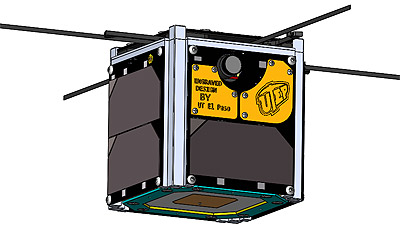 The Orbital Factory 2 (OF 2) mission by the University of Texas is a 1U CubeSat to test additive manufacturing tasks in open outer space subject to the vacuum, reduced gravity and the extreme temperatures.

Orbital Factory II will perform a technological demonstration of 3D printing of conductive material. The small satellite features a 3D printing 2-DOF gantry table mechanism that will deposit conductive ink and simulate repairing of a solar cell. The material to 3D print was selected based on bulk resistivity, viscosity and amount of conductive particles, as well as curing time and low outgassing. Up to date, vacuum test has determined that the ink will cure in space after 90 seconds and as a such will be conductive after that period of time. A VGA camera and sensor measurements will determine the mission success.

Some of the satellites parts have been 3D printed in ProtoThermTM 12120, which is a polymer to produce high-temperature tolerant and liquid resistance parts by SLA process. The satellite also includes an S-band patch antenna as a secondary payload. The antenna was entirely designed and built by Lockheed Martin Co. Since the gain pattern of the S-band antenna is narrow, an attitude controller based on magnetorquers will be implemented to ensure proper pointing to the Earth.