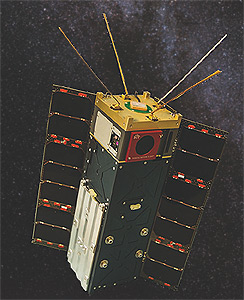 HARP (HyperAngular Rainbow Polarimeter) is a mission conducted by the Department of Physics, University of Maryland, Baltimore County, to measure the microphysical properties of cloud water and ice particles.

HARP is a precursor for the new generation of imaging polarimeters to be used for the detailed measurements of aerosol and cloud properties. The HARP payload is a wide FOV imager that splits three spatially identical images into three independent polarizers and detector arrays. This technique achieves simultaneous imagery of three polarization states and is the key innovation to achieve high polarimetric accuracy with no moving parts.

The HARP CubeSat mission is a joint effort between UMBC, the PI institution, who will provide the sensor hardware and characterization and scientific analysis; the Space Dynamics Laboratory  Utah State University, who will provide the 3U CubeSat spacecraft and mission operations; and Science and Technology Corp, who will lead the science algorithm development and science application funded by NOAA. NASA Wallops will support instrument environmental testing, mission operations, and communications. The program is in support of the NASA Earth Science Technology Office (ESTO).

The spacecraft consists of a 3U CubeSat with 3-axis stabilization designed to keep the imager pointing nadir during the data acquisition period. The hyper-angular capability is achieved by acquiring overlapping images at very fast speeds.

The objectives of the HARP mission are:

The desired mission life consists of 3 months for technology demonstration and an extended science data period of another 7 months for a total of a year in orbit.

The follow-on HARP-2 instrument will be flown on the PACE mission.