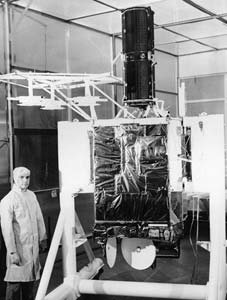 LES 8 and 9 (Lincoln Experimental Satellite 8 and 9) were experimental, nuclear powered geostationary comsats. They were built to experiment with improved methods for maintaining voice or digital data circuits among widely separated, fixed or mobile communications terminals. The circuits were jam-resistant to allow operation in a hostile environment. Stationed 90° apart, they conducted the first inter orbital K-band communication links. Many of the technologies pioneered with these spacecraft were utilized in the later FLTSATCOM and Milstar satellites. Besides the communication experiments, ablative pulsed plasma thruster for stationkeeping were also tested.

MIT Lincoln Laboratory developed and built for the Department of Defense a pair of experimental communications satellites, LES-8 and -9, designed to operate in coplanar, inclined, circular, geosynchronous orbits and to communicate with each other via intersatellite links (cross-links), as well as with fixed and mobile terminals. Uplinks, downlinks, and intersatellite links at extremely high frequency (EHF) augmented the military UHF band. The EHF band held out the promise of abundant band width to accommodate many simultaneous users and spread-spectrum systems of modulation and demodulation for anti-jamming communications links. For reasons of convenience, operating frequencies in the Ka-band (thirty-six to thirty-eight gigahertz) were selected.

Intersatellite links in the range of fifty-five to sixty-five gigahertz would have been desirable, because the absorption by oxygen molecules would attenuate signals passing through the atmosphere. However, it soon became apparent that the technology of 1971, on which LES-8 and -9 had to be based, would not support such an enterprise. Very little test equipment was commercially available for frequencies above forty gigahertz. Therefore, attention focused on the development of the needed components and subsystems at the Ka-band.

One of the strengths of Lincoln Laboratory's space communications program is that it encompasses the development of both terminals and satellites under one roof. The transmission and reception for satellite lines providing substantial anti-jamming capability, such as those links through LES-8 and -9, are complex when compared to links that rely on unprotected transponders, such as the links through the earlier LES. It would be very difficult if the space and terrestrial segments of a modern military satellite communications system were developed separately and their first operating encounter took place after launch. Lincoln Laboratory conducted extensive end-to-end testing of communications lines before launch, including the terminals that Lincoln Laboratory developed and those developed by the Air Force and the Navy. The generally smooth course of testing in orbit owed much to the prelaunch testing at Lincoln Laboratory.

The LES-8 and -9 intersatellite links successfully addressed the key technical problems that confront the implementation of satellite-to-satellite communications. LES-8 and -9 were launched together on 15 March 1976 aboard a Titan-3(23)C booster. Their launch was tailored to suit the companion Naval Research Laboratory Solrad 11A and Solrad 11B satellites and to facilitate the evaluation of specialized gyroscopes designed by the Charles Stark Draper Laboratory that LES-8 and -9 carried as flight experiments. LES-8 and -9 are powered by radioisotope thermoelectric generators (RTGs) and have no solar cells or batteries. The design of the RTGs had to assure their physical integrity in the event of a launch failure, so that the potential environmental hazard would be acceptable. During compatibility tests and preparations for launch, Lincoln Laboratory had to develop special procedures and pay scrupulous attention to health factors to ensure that workers would not be overexposed to particle radiation. The RTGs were well worth the effort. The compatibility of these rugged power sources with complex signal-processing circuitry has been well established. These RTGs are similar to the ones that power the Voyager spacecraft, which have been exploring the outer planets and beyond since 1977.

LES-8 and -9 represent the high-water mark to date of Lincoln Laboratory's program in space communications. In addition to their complex communications system, these satellites have systems and subsystems for housekeeping functions, including attitude control, onboard (secondary) propulsion, telemetry, and telecommand. Lincoln Laboratory continues to be responsible for the upkeep of LES-8 and -9. The Lincoln Experimental Satellite Operations Center operates and maintains these satellites, and it will continue to serve them as long as they remain useful. The technologies of onboard signal processing and of EHF transmission and reception, successfully demonstrated in the LES-8 and -9 Joint Test Program, have been incorporated in subsequent military satellite communications procurements. The single-channel transponders on the DSCS III satellites and the Milstar communications system itself have flowed directly from LES-8 and -9.

The LES 8 satellite reportedly featured a plane mirror to reflect the view of an observer into empty space as a stealth experiment.