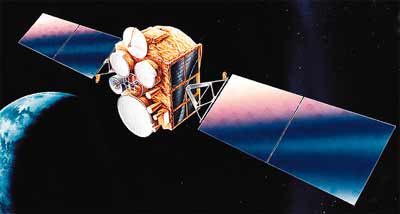 The system is used for high priority communications such as the exchange of wartime information between defense officials and battlefield commanders. The system provides uninterrupted secure voice and high-data rate communications to globally fixed and mobile DoD users, NATO, the United Kingdom, the Diplomatic Telecommunications Service, and the White House Communications Agency.

Two solar wings produce 1700 Watts of onboard power at the beginning of life and 1230 watts at the end of life.

DSCS-3 satellites were designed to be injected directly into GEO by the launch vehicle (Titan-34D IUS, Titan-34D Transtage or Shuttle IUS) without the need to incorporate an apogee kick engine. Switching to Atlas-2, Atlas-2A and Delta-4M launch vehicles made it necessary to include a dedicated apogee kick stage (IABS) with the satelite for injecting the DSCS-3 into GEO orbit.

Another DSCS-3 satellite was constructed under the name STARSAT to be used as a test object in the "Huron King" nuclear weapons test for the effects of system generated electromagnetic pulse (SGEMP) on a full-scale operating DSCS-3 military communications satellite. The spacecraft was contained in a large above-ground tank.

The DSCS-3 is succeeded by the WGS series of satellites.

DSCS-3 B12 was retired in 2015 and was moved into a graveyard orbit above the geostationary belt.