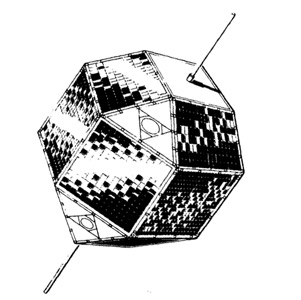 LES 3 (Lincoln Experimental Satellite 3) was not a communications satellite, but only an UHF signal propagation experiment, featuring an UHF transmitter.

MIT Lincoln Laboratory carried out two programs to measure the characteristics of the UHF environment. In the first program, receiving equipment was installed in aircraft and flown over representative cities and varied terrains, and the ambient radio noise was measured. In the second program, propagation phenomena between satellites and airborne terminals were examined. For this second program, LES-3 was built in haste, using technology from LES-1, -2, and -4, and was launched along with LES-4 on 21 December 1965.

LES-3 was essentially an orbiting signal generator, emitting a signal near 233 megahertz. Given the degree of smoothness of the planet's surface relative to the one-meter wavelength of 300 megahertz (the middle of the military UHF band), much of its surface is mirrorlike. As a result, electromagnetic waves could be propagated between the satellite and the airborne terminal by more than one path. By knowing the likely parameters of the signal delays, the communications system designers were able to construct modulation and demodulation circuits that would not be confounded by multipath-propagation effects.

Booster problems trapped LES-3 and LES-4 in transfer ellipses, instead of equatorial near-geosynchronous orbits. The actual orbit of LES-3 did permit the gathering of multipath-propagation data over a wide variety of terrains, and it gave the Lincoln Laboratory test team a reason to fly to exotic destinations to receive LES-3 signals reflected by representative types of terrain. LES-3 ultimately reentered the atmosphere and disintegrated.