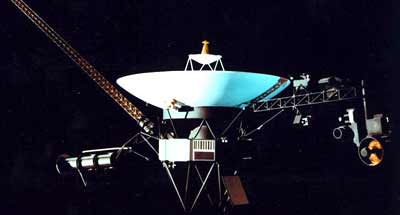 The last two spacecraft of NASA's Mariner series Mariner Jupiter/Saturn A and B, renamed Voyager 1 and 2 were the first in that series to be sent to explore the outer solar system. Preceeded by the Pioneer 10 and 11 missions, Voyager 1 and 2 were to make studies of Jupiter and Saturn, their satellites, and their magnetospheres as well as studies of the interplanetary medium. An option designed into the Voyager 2 trajectory, and ultimately exercised, would direct it toward Uranus and Neptune to perform similar studies.

Although launched sixteen days after Voyager 2, Voyager 1's trajectory was a faster path, arriving at Jupiter in March of 1979. Voyager 2 arrived about four months later in July 1979. Both spacecraft were then directed on to Saturn with arrival times in November 1980 (Voyager 1) and August 1981 (Voyager 2). Voyager 2 was then diverted to the remaining gas giants, Uranus (January 1986) and Neptune (August 1989). A more detailed table specifying the closest approach distances/times for these encounters is available.

Data collected by Voyager 1 and 2 were not confined to the periods surrounding encounters with the outer gas giants, with the various fields and particles experiments and the ultraviolet spectrometer collecting data nearly continuously during the interplanetary cruise phases of the mission. Data collection continues as the recently renamed Voyager Interstellar Mission searches for the edge of the solar wind's influence (the heliopause) and exits the solar system.

The following instruments were onboard:

A comprehensive list of the achievements of Voyager 1 and 2 would be so extensive that space doesn't permit. Here, then, are a (very) few results that would rank near the top of many such lists.