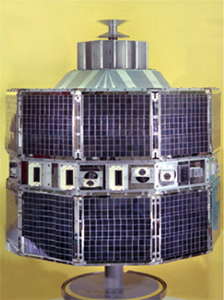 LES 4 (Lincoln Experimental Satellite 4) was a spin-stabilized communication technology satellite. It featured internally nearly the same structure and transmitter as LES 1 and 2, but was fitted 10 sided prism shaped solar array. The 8-horn electronically despun antenna were fitted in a plane normal to the satellites spin axis.

The next step in Lincoln Laboratory's program in space communications was to park a satellite in geosynchronous orbit. LES-4 was built to fulfill that mission. The satellite was an outgrowth of LES-1 and -2, but it featured more solar cells and a larger array of Sun and Earth sensors. LES-4 carried an instrument for measuring spatial and temporal variations of the energy spectrum of trapped electrons encountered in orbit. This instrument was added to provide information both for scientific interest and to aid the design of future spacecraft.

The LES-4 transponder was very similar to the transponder of LES-2, but with increased transmitter power and lower noise. The LES-4 transmitting antenna comprised eight horns uniformly spaced in a plane normal to the satellite spin axis. As in the earlier LES satellites, Sun and Earth sensors and logic circuits were used to despin the antenna electronically. The different antenna layout from LES-2 was possible because LES-4 was intended for use in a synchronous equatorial orbit, where coverage could be limited to 26° in the north-south plane.

A Titan-3C booster was to carry LES-4 and its companion, LES-3, to a near-geosynchronous altitude and deposit them in circular, near-equatorial orbits. Unfortunately, the booster failed to finish its job, leaving these satellites stranded in their transfer ellipses.

LES-4's repeated trips between perigee (195 kilometers) and apogee (33,700 kilometers) gave it many opportunities to measure the radiation environment over a wide range of altitudes. Also, its communications system seemed to be working as well as it could under the handicap of being in the wrong orbit. Ultimately the pressure of solar radiation caused the perigee of LES-4's orbit to descend into the upper atmosphere, and it burned up.