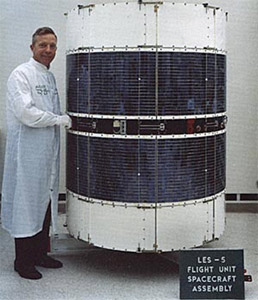 In 1965, the Department of Defense established Tri-Service Program 591 (Tactical Satellite Communications) to enable the Army, Navy, and Air Force to evaluate the potential usefulness of satellite communications in the military UHF band. Lincoln Laboratory was chosen to provide the satellites essential to the test program. LES-5 was to be built and launched as soon as possible; LES-6 would incorporate improvements on LES-5 and would be launched a year later. The three military services would procure test terminals that would work with LES-5 and -6 and would arrange for their installation in ships and aircraft.

The LES-5 and LES-6 satellites had cylindrical shapes with equipment mounted on a platform near the center of the cylinder and normal to its axis. Both had multiple-element antennas mounted around the cylindrical surface. In addition to their communications equipment, the satellites carried solar cell degradation and radio frequency interference (RFI) experiments. LES-6 also had a prototype autonomous stationkeeping subsystem.

LES-5 was launched in July 1967 with three IDCSP satellites and was placed into a subsynchronous orbit similar to theirs. Both Lincoln Laboratory and the military services conducted a number of tests with LES-5. Aircraft, shipborne, and fixed and mobile ground terminals were all involved in the tests, which were considered very successful. LES-5 operated until May 1971, when it was deactivated. In early 2020, nearly 49 years after deactivation, the satellite became active again and emitted telemetry.