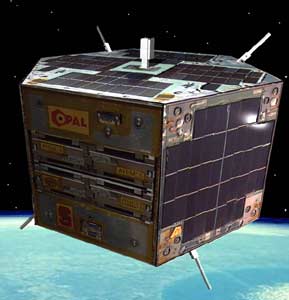 Each SQUIRT satellite is meant to be constructed in one year and for only $50,000. The design for OPAL was started in early April of 1995. However, since this is only SSDL's second satellite, development time has been extended. OPAL was launched on 26 January 2001, on the maiden flight of a modified Minuteman missile called the Minotaur-1.

OPAL's (Orbiting Picosat Automatic Launcher) primary mission is to demonstrate the feasibility of launching multiple picosatellites from a mothership satellite. The satellite's secondary payloads are an accelerometer testbed and a magnetometer testbed, which will perform component characterization.