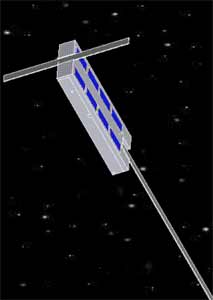 Artemis is the second undergraduate satellite project at Santa Clara University. It is part of the Santa Clara Remote Extreme Environment Mechanism (SCREEM) laboratory, which was started to investigate and design various mechanisms to survive extreme environments. These environments include the vacuum of space and the depths of the ocean.

As one of the three picosatellite providers for Stanford's Orbiting Picosat Automatic Launcher (OPAL) project, the Artemis group is using a low cost, quick prototype process to continually explore the limitations of picosatellites.

The Thelma and Louise satellites carried a VLF wave experiment. The VLF receiver board is the main payload aboard Artemis. The objective is to research the effects of lightning on the outer ionosphere. Measurements are taken by using the VLF radio signals traveling between the ground and the S/C. Lightning discharges and the effects on the Earth's near space environment can be recorded with the VLF receiver. The VLF receive frequency range is 0.1-12 kHz, with 5 kHz considered typical of a lightning strike. The two picosatellites have different VLF thresholds, namely 100 mV and 10 mV respectively. Measurements are taken simultaneously by both picosatellites. Comparison of the data permits the extraction of the occurrence and amplitudes of horizontal and vertical lightning.

The three picosats (Thelma, Louise and JAK) were launched in January 2000. Unfortunately no data was received from the picosats after they were deployed (JAK on 10. February 2000 and Thelma and Louise on 11. February 2000).