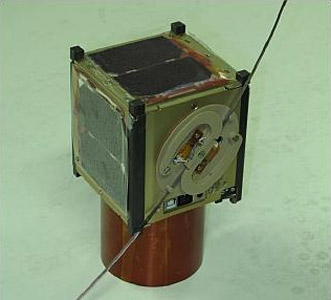 e-st@r (Educational SaTellite @ politecnico di toRino) is a CubeSat-type naonsatellite built by the Politecnico di Torino. It was launched on the maiden flight of the Vega booster.

e-st@r project is an educational and research program which is being carried out at Politecnico di Torino by the AeroSpace System Engineering Team (ASSET). Aim of the project is the development and launch into orbit of the e-st@r satellite, which is a CubeSat class spacecraft. The project is entirely carried out by students, both graduate and undergraduate, under the supervision of researchers and professors.

A test of miniaturized fuel cells originally planned has been cancelled.

e-st@r's signal has been received at the team's ground station in Italy, and by radio amateurs around the world. However, operations have been affected by unexpected tumbling of the CubeSat. Until it achieves attitude stabilization, the team has placed e-st@r in power saving mode. In December 2012, the e-st@r team of Politecnico di Torino announced the termination of e-st@r communications and the end of the mission.

A reflight as e-st@r 2 is planned. e-st@r 2 is one of the educational CubeSats chosen for Phase 1 and 2 of ESA's Fly Your Satellite! initiative.