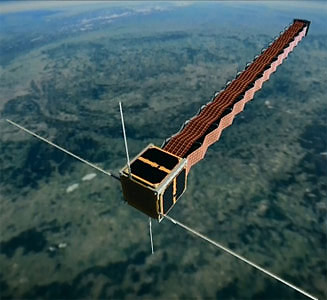 PW-Sat 1 is the first polish nanosatellite. The CubeSat-based satellite is to deploy a flexible solar array in space.

PW-Sat 1 was orbited as a piggy-back payload on the maiden flight of the Vega launch vehicle. The satellite was successfully deployed in orbit. Signals were received from the satellite for few months but at some time the satellite's visibility times and communication module errors made it impossible to receive any correct signal.