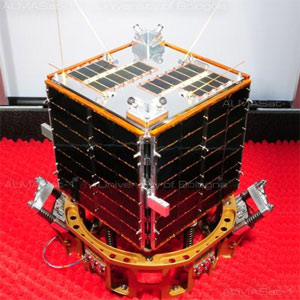 ALMASat (ALma MAter SATellite) is an small satellite program of the University of Bologna.

The first ALMASat (ALma MAter SATellite) demonstration mission was due for launch on November 2005 on board a Dnepr rocket, but has been delayed to a launch on the maiden Vega flight in early 2011.

Among the possible future applications, there is the on-orbit experimentation of a passive electro-dynamic de-orbiting system, jointly developed by Alenia Spazio (Turin plant) and the University of Rome “la Sapienza”.

The satellite weighs about 12.5 kg and consists of a cubical prism, 300 mm side, with a modular structure made of six shop-machined Al trays, kept together by eight stainless steel bars. Four Al/Al honeycomb lateral panels, which are the support structure of glued solar panels, complete the satellite structure. This architecture has been selected in order to have a multi-purpose bus, to be used with minor changes for several missions, accommodating payloads with different volume and power requirements.