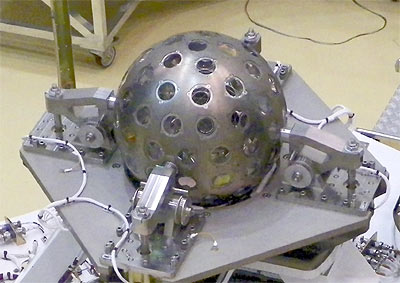 LARES (Laser Relativity Satellite) is a passive satellite with laser mirrors for the study of the Earth gravitational field and general relativity measurements (Lense-Thirring effect).

LARES is basically a solid sphere made of Tungsten with a diameter of 376 mm and a mass of 400 kg. The surface of the sphere is covered by 92 Corner Cube Reflectors (CCR). To achieve its scientific objectives, LARES will be injected into a circular orbit at 1200 km altitude with an inclination of 71°.

As LARES orbits the Earth, laser beams are emitted from a number of ground stations around the Earth, the International Laser Ranging Service, and reflected by the CCRs on LARES to the ground stations. The time delay between emission and arrival of the laser beam provides a measure of the round-trip distance to LARES, allowing a highly accurate orbit determination. Correcting for a number of effects, most importantly the deviation of the Earth gravitational field from an ideal sphere, yields the frame-dragging effect.

The main scientific objectives of the LARES mission are:

On February 7, the ASI board approved funding for the LARES mission, that will be launched with Vega's maiden flight.

LARES is deployed from the LARES-A&H/SS equipment mounted on the AVUM upper stage of the Vega launch vehicle.