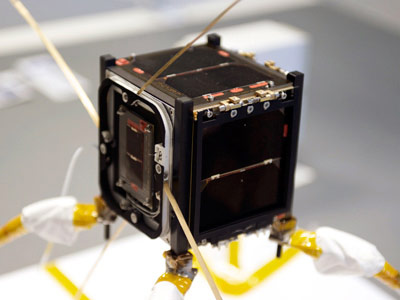 The main objective of the mission is the deployment of XaTcobeo (formerly known as Dieste), a standard based 1U CubeSat (10 cm × 10 cm × 10 cm) in space, together with a ground segment which is being built at the Universidade de Vigo. This satellite is being developed for transporting two payloads: a software defined reconfigurable radio (SRAD) and a system for measuring the amount of ionizing radiation (RDS). There is also an experimental solar panel deployment system (PDM).

This is a joint project between INTA and the University of Vigo, which has been selected as an educational project focused on supplying the students with access to space, a chance that otherwise would not be possible. The satellite is to be thrown in the Maiden Flight for the new launch vehicle of ESA, named Vega.

The first objective of this project is to learn: teachers, experienced researchers and students will have a unique chance to improve their skills in electronics, communication engineering or software development. As every space project, the satellite will have to facea extreme feasibility. This handicap will complicate the design and the implementation process, but will also boost the academic revenues that everybody implied would get. In order to achieve this objectives a new distributed documentation and organization system has been implemented. The ESA standards will be strictly followed in every step of the development.