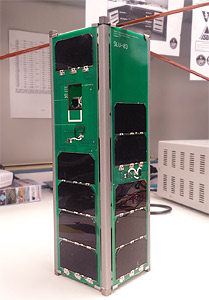 The COPPER 2 (Close Orbiting Propellant Plume and Elemental Recognition 2) mission is to perform a flight of a commercially-available, compact microbolometer array, a tiny infrared camera developed by FLIR Systems, to evaluate the suitability of using this instrument for Earth observation and space situational awareness. It is a follow-on mission to the COPPER (SLU 01) satellite, but in a larger 3U CubeSat bus.

COPPER 2 is an 3U CubeSat designed to operate in Low Earth Orbit. It is to flight-test a neural network for automated event detection and response. The neural network will be trained to detect interesting and unexpected science events (in images and on-board telemetry), and the spacecraft will record these events.

The payload will consist of two imagers: the FLIR Quark LWIR, and a commercial visible-light imager.

The launch was planned in early 2017 as asecondary payload on a Minotaur-C-XL-3210 rocket, but moved to a Falcon-9 v1.2 (Block 5) launch. After technical problemd during development, COPPER 2 was cancelled.