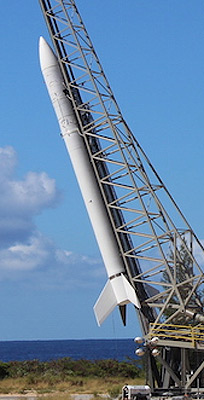 The all solid fueled vehicle uses a LEO-46 motor of as first stage with a burn time of 73 sec. A LEO-7 motor acts as second stage and a Spark-30 or an LEO-1 as third stage. It is spin and fin stabilized during first stage burn and has attitude control for the two upper stages. The low cost rocket will be launched from a rail launcher and can put a payload of 250 kg into a 400 km sun-synchronous orbit.

The Super Strypi vehicle is launched from the rebuilt Kokole Point rail-launcher (LP-41) at Barking Sands, Kauai (Pacific Missile Range Facility). The maiden launch was moved to 2016 due to a stage 1 issue, but moved back to late 2015, when ORS decided, they could fly even with this issue, albeit at a higher risk. The maiden launch failed during the stage one burn.

It is the intention of the develoment partners to turn the vehicle over to a commercial launch provider, which could use the rocket to conduct launches for both the military and commercial sector. In October 2019, Xbow Launch Systems, who offer the Super Strypi vehicle under the designation Bolt, was among eight launch providers selected for OSP-4 by the US Air Force.