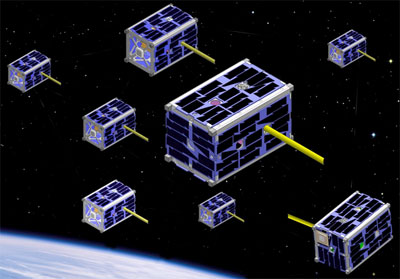 The EDSN (Edison Demonstration of Smallsat Networks) mission will deploy a swarm of eight cubesats into a loose formation orbiting approximately 400 kilometers above Earth. EDSN will demonstrate the potential value of multiple small satellites as tools for a wide array of scientific, commercial, and academic space research. Other goals of the project include reducing the cost and time required to design and build future small spacecraft as well as testing new software applications.

The EDSN satellite swarm is composed of eight identical 1.5U CubeSats (10 cm × 10 cm × 17 cm), with a mass of 1.7 kg each. The EDSN spacecraft use low cost COTS components and inherited many design elements from the PhoneSat 2.0 design. A Samsung Nexus S smartphone is used as the primary processor. Eight flight satellites, four flight spares and four engineering development units were built. Each satellite carries an identical sensor to measure space radiation in Earth orbit. The continuous sensor data from each of the satellites in their separate locations can be collected and combined to provide a much more complete picture of the space environment than possible with a single satellite.

The EDSN swarm is expected to operate for at least 60 days in orbit and they will remain in orbit for up to four years. The plan is to launch all of the spacecraft together as secondary payloads on a Super-Strypi launch vehicle from Kauai, Hawaii in October 2015.

The EDSN mission will demonstrate new communications capabilities, including satellites sending data, as needed, amongst themselves. This allows for flexible and simplified spacecraft operations with more rapid return of scientific data.

The EDSN project is managed and conducted by a team at the NASA Ames Research Center, Moffett Field, Calif., and is funded by the Small Spacecraft Technology Program in NASAs Office of the Chief Technologist. The project began in October 2012 and should be completed in a little over two years from start.

The satellites were to be launched on the maiden flight of the Super-Strypi rocket from Hawaii into a 415 km × 490 km polar orbit, but were lost in a launch failure. A reflight using the spare satellites is not planned.