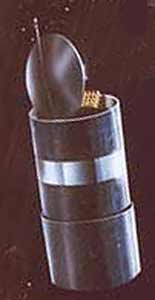 Anik C is Canada's first dedicated spacecraft to offer point-to-point commercial services in the 14/12 GHz Ku-band frequencies. The satellite triples the power output of the Hughes-built Anik A, the country's first communications satellite. Anik C also allows a significant increase in telecommunications capacity over Anik A.

The spacecraft was contained in a special cradle that housed the ejection system and was covered by a protective sunshield. The sunshield was opened, and Anik C was spun up while in the cradle. Explosive bolt cutters fired, allowing four springs to eject the satellite. After orbiting halfway around earth, the satellite fired its McDonnell Douglas payload assist module (PAM) for insertion into an elliptic transfer orbit. The apogee motor, a Thiokol Corporation Star-30B solid propellant rocket, placed the satellite into a near-synchronous orbit. The satellite then drifted to its final orbital location.

When the satellite neared its orbital slot, the electronics shelf was despun, the antenna erected, and the telescoping solar panel deployed, exposing the inner solar array to sunlight.

Anik C's solar array of K7 cells, which generates 19.7 milliwatts per square centimeter, produced more than 900 watts of dc power at beginning of life. Three nickel-cadmium batteries provide power during eclipse, when the spacecraft passes through Earth's shadow. The communications repeater uses 15 watt, multicollector traveling wave tube amplifiers in each of the 16 channels. A shared aperture grid antenna 6 feet (1.8 meters) wide creates the transmit and receive beams using two reflecting surfaces. One surface is sensitive to vertical polarization and the other to horizontal. Separate microwave feed networks are used for the different polarizations. With the high gain developed by the antenna, the effective isotropic radiated power (EIRP), or signal strength, is 46.5 dBW in the primary coverage zones.

Stowed for launch, with solar arrays telescoped together and the antenna reflector folded down, Anik C measured only 2.82 meters high and 2.16 meters in diameter. When the satellite began operation, with antenna raised and solar panels deployed, its height increased to 6.43 meters. The on-station weight of the satellite is 562.5 kg, of which 99 kg is propellant. Attitude control and stationkeeping is provided by four thrusters. The design life of each satellite is 10 years. In geostationary orbit, 35,680 km above the equator, Anik C-3 is positioned at 114.9 degrees West longitude, Anik C-2 is at 110 degrees West longitude, and Anik C-1 is at 107.5 degrees West longitude.

A significant portion of the design, manufacture, and testing of the Anik C spacecraft was done in Canada. Spar Aerospace Ltd. of Toronto, Ottawa, and Montreal was the principal subcontractor. Other Canadian participants included SED Systems Ltd. in Saskatoon, Saskatchewan; COMDEV Ltd. in Montreal; and the Fleet Industries division of Ronyx Corporation Ltd. in Fort Erie, Ontario.