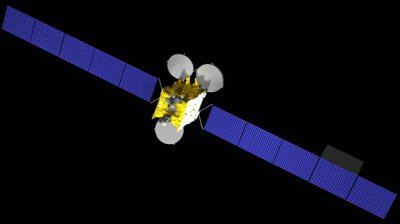 EADS Astrium has been selected by Telesat to build the company's new Anik F3 satellite. Planned to enter into service in 2006, Anik F3 will provide satellite communications services in C, Ku and Ka-bands over a large area covering North America from its orbital location of 118.7º West.

EADS Astrium, as prime contractor for Anik F3, will design and build the satellite and supply both the payload and the platform. Canadian industry will supply a significant part of the spacecraft equipment and technology. The satellite will provide a full range of satellite communications services that include telephony, business communications, Internet-based services and television transmission and is equipped with 24 active transponders in C-band, 32 in Ku-band and 2 in Ka-band.

The spacecraft will have a launch mass of 4.6 tons, a solar array span of 35 meters once deployed in orbit, and spacecraft power of 10 kW at end of life. The satellite, operating in geostationary orbit, will provide commercial services for a minimum of 15 years.