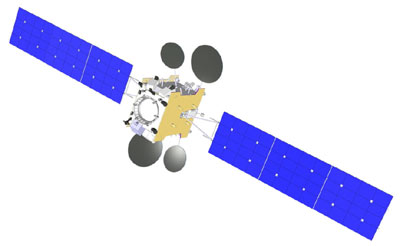 On July 30 2008 a contract was signed between the JSC "Academician M.F. Reshetnev" Information Satellite Systems and Israeli-based Space Communication Ltd. to build and launch the geostationary satellite system AMOS-5, based on the Ekspress-1000N platform.

The contract covers the development and launch into orbit of the satellite AMOS-5, the establishment of the ground control segment, and personnel training and maintenance services. The subcontractor on the transponder and antennas is Thales Alenia Space. AMOS-5 features 18 C-band and 16 Ku-band transponders.

The AMOS-5 was scheduled for delivery and launch by 31 March 2011, and is due to operate for 15 years, at least 14 of which will be insured. AMOS-5 was successfully launched on 11 December 2011 together with Luch 5A.

AMOS-5 has suffered some problems of the power system, which affected its ability to control some of the eight thrusters. This failure was expected to trim about one year from the originally expected orbital service life time. On 21 November 2015, the ground station lost contact with AMOS 5 for unknown reasons. In mid December 2015, the satellite was declared a total loss, as all attempts to revive AMOS-5 failed. It coluld not be moved towards a graveyard orbit. AMOS 17 has been ordered as a replacement.