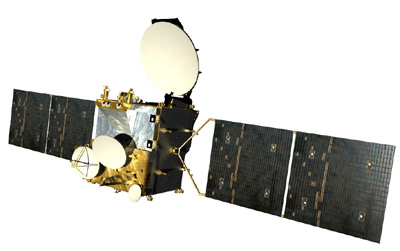 Spacecom Satellite Communications has signed an agreement in September 2005 with Israel Aircraft Industries (IAI) to buy its third satellite, AMOS 3, from the Israeli defense contractor.

IAI will start construction of the communications satellite immediately and launch the AMOS-3 in December 2007. The cost of the new satellite is $170 million.

AMOS-3 will replace the older AMOS-1 and will be a far more sophisticated satellite than its predecessors and offer far greater capacity. The AMOS-1 has been in service since 1996. Spacecom's second satellite launched in 2003.

IAI said it would develop and build the AMOS-3 with advanced, innovative technologies. The new satellite will be based on the structure of the AMOS-2, with improved performance of its communications payload.

The new satellite will include 15 high-capacity transponders in the Ku- and Ka-band delivered by two antennae, both of which will have ground-controlled broadcasting capability. The AMOS-3 will cover the Middle East, Europe, Africa, and parts of the Americas.

Thales Alenia Space (formerly Alcatel's Alenia Space subsidiary) and Italy's Telespazio Holdings will build the communications payload of the AMOS-3. Spacecom anticipates $40 million in annual revenues if the entire broadcasting capacity is sold. Spacecom has already received a commitment from the state of Israel to lease channels on the AMOS-3. The value of the contract is put at $60 million during the expected 18-year life of the satellite. The satellite will be renamed AMOS 60 to commemorate the 60th anniversary of the state Israel.

AMOS 3 was launched by the maiden Zenit-3SLB launch vehicle, which will put it directly into the geosynchronous orbit.