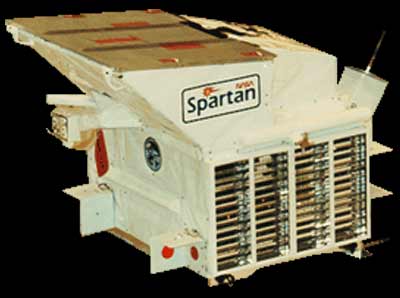 The Spartan series consisted of low-cost, Shuttle-launched, short-duration, sounding-rocket-type payloads. The payloads were retrievable and reusable with a turnaround time of approximately 6 to 9 months. Spartan had relatively few operational interfaces with the Shuttle. It operated as an autonomous sub-satellite, and the data are stored on an internal tape recorder. Pointing and stabilization are achieved by an attitude control system capable of three-axis stabilized pointing to any target within ± 3 arc-minutes.

The objective of this investigation was to obtain UV spectra of the coma and tail of Comet 1P/Halley shortly before its perihelion, in order to determine the rates of production of O+ and OH-, and to relate the production of these species to the photodissociation of water. In addition, a search was to be made for various nitrogen-, carbon-, and sulfur-containing molecules and radicals. The instrument consisted of two identical Ebert-Fastie spectrometers, one covering the wavelength range 1250 to 1660 Å and the other covering 1600 to 3200 Å. The wavelength resolution was approximately 2 Å. The instrument was similar to ones flown on the Mariner 6, 7, and 9 spacecraft. Although the comet-sun angle would have been less than 45 deg at the time of the mission, unwanted sunlight effects were to be eliminated by using a sunshade and by using the earth as an occulter. Two space-qualified Nikon F-3 cameras were to be used to reconstruct the precise history of the pointing direction during the data-gathering periods and to provide a record of the large-scale activity of the comet during the mission, including nuclear outbursts, comal asymmetries, and the angle of separation of the dust tail from the ion tail.

This spacecraft was lost when Space Shuttle Challenger exploded during launch.